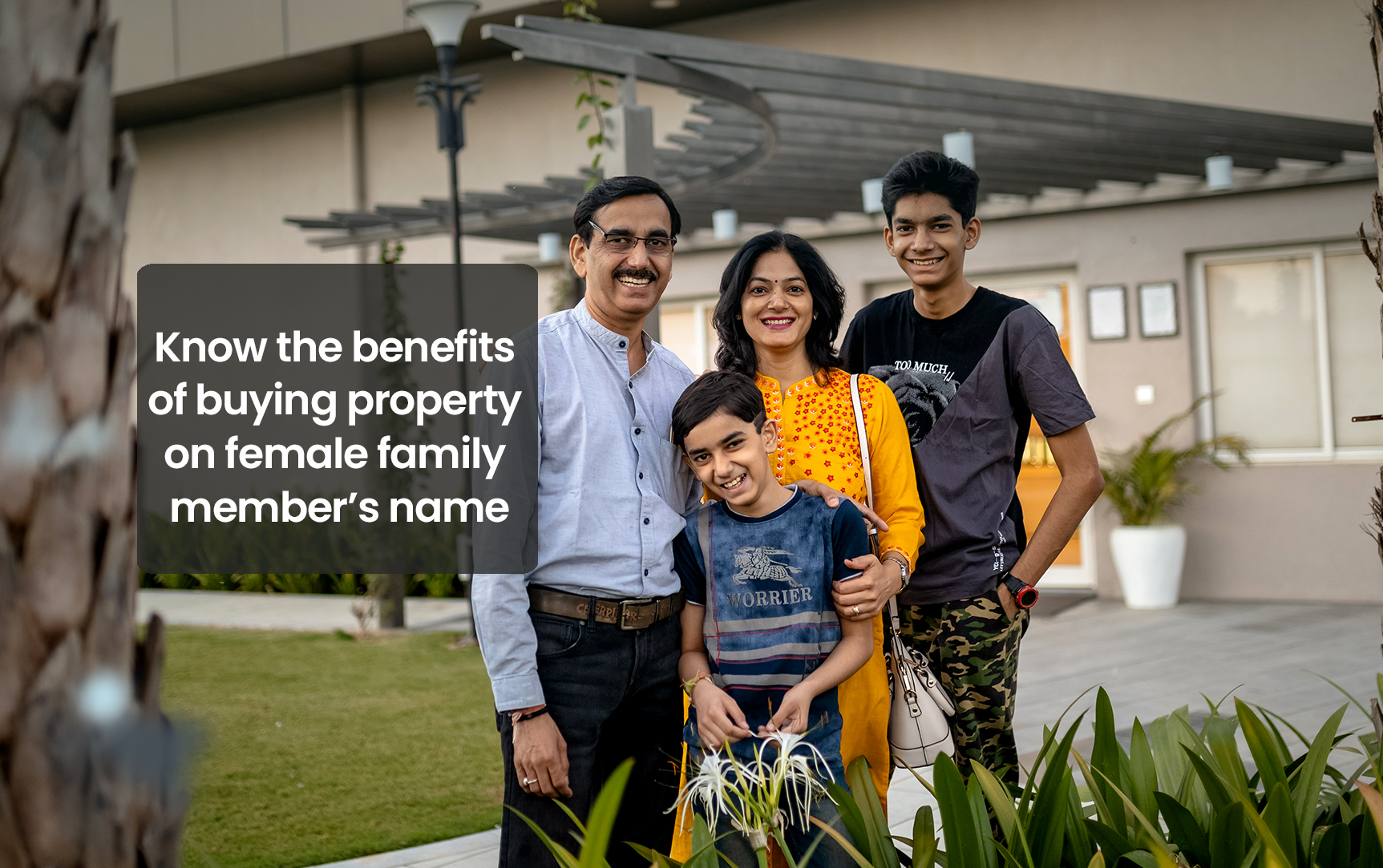 Buying a property or taking a home loan in the name of a female family member like wife, sister or mother has the following benefits:

Majority homes in India are financed through home loans because they are an effective and practical way to buy one’s dream house. But before financing your property, banks and NBFCs evaluate the home loan seeker’s loan eligibility which primarily depends on the salary. Co-owning a house with one’s wife helps increase the loan amount, as in this case both applicant’s incomes are taken into consideration.

Home loans at a lower rate

A number of leading banks and NBFCs in India offer home loans with concessional interest rates to women, besides various lucrative schemes, offers, and initiatives. This encourages women entrepreneurs, executives, and even homemakers to take a home-buying decision. As women are generally perceived to be more punctual and sincere in paying back loans and default less on making payments, thus banks also prefer giving loans to women. ‘Her Ghar’ scheme by SBI has waived off the processing fee for women home loan applicants. ‘Women Power’ by HDFC, and Mahila Awas loan are some other schemes which benefit women who are seeking home loans. An important point to note is that banks or HFCs offer discounted rates only if the woman is the solo or first co-applicant.

The prevailing home loan interest rates (floating) for women borrowers vs others are as follows:

Partial waiver on stamp dutyIn many Indian States, stamp duty for women homebuyers is comparatively lesser than those applicable for men. Rajasthan offers a 1% reduction in stamp duty for women and there is a 2% reduction in the stamp duty payable in Delhi and Haryana. This is irrespective of the fact whether the woman is a sole or joint owner of the property. There is a lower stamp duty charge even if the property is given to the female family member as a gift. For instance, in Jaipur, Rajasthan if you buy a flat for Rs 1 crore, the stamp duty for a male buyer would be Rs 6 lakh. Whereas, for a man and woman as joint owners it would be Rs 5 lakh and for a woman buyer, it would be Rs 4 lakh. Delhi government charges stamp duty of 4 percent from women compared with 6 percent for men and 5 percent for a man and woman as joint owners.Stamp duty charges for Women Vs Men Tax benefits on Home loan

Both men and women are entitled to a tax deduction on interest paid up to Rs 2 lakh on loan availed for purchase and construction of homes. If the property is owned jointly by a married couple and the wife is earning then both of them can claim tax deductions separately. Under the newly implemented 80EEA Act, if a house is bought in the financial year of April 2019-March 2020 under Rs. 45 lacs, additional deduction of Rs. 1.5 lacs can be availed.

Under the Pradhan Mantri Awas Yojana (PMAY), women have been kept under the preferred class of homebuyers. Even an unmarried girl can apply for a PMAY subsidy or a Home Loan as the program doesn’t discriminate on the basis of gender or marital status. PMAY guidelines make it mandatory to have at least one female family member registered as the owner of the house. In case where a woman holds the ownership of the house, the Govt. provides subsidy up to a maximum of Rs 2.67 lakh.

A female co-applicant is not mandatory while applying for a home loan under PMAY in the MIG 1 or MIG 2 category. The same applies on home loan under PMAY availed by applicants from EWS and the LIG category. But women must be co-owner of the property being bought using the PMAY home loan in case of EWS and LIG category applicants. This rule is applicable only for newly purchased houses under the scheme and not for houses that have been constructed on an existing piece of land or for repairs & renovation work of an existing house.

While renting out their property, both men and women are allowed to deduct the interest paid on the loan against the net rental value, which is over and above the 30% standard deduction available on rental income.

Buying a house in a female’s name helps in securing the financial assets too. In case an individual incurs loss or debt in business, the house registered in the name of the wife cannot be claimed by government officials or creditors to cover the loss, provided that the wife is not a co-owner or guarantor in any loan availed by her spouse.

A couple has equal succession rights in case they co-own a house or property. So in case of a partner’s death, the other partner can claim his/her rights on the property. There are no legal disputes with other family members and one saves money on mutation charges.

While buying a house in the name of the wife, one must always remember that:

The following combinations for co-applicants are accepted:Unaccepted Combinations:

The biggest advantage of buying a home as a single woman is the sense of security, stability and ownership one gets from having one’s own place. It’s a prudent long term investment which benefits the future generations as well. When one has decided to settle in a particular location, then its better to buy than pay exorbitant rents every month. Single women who have migrated to bigger cities tend to be thorough in their research and base their property purchase on factors such as safety and accessibility. According to thehindu.com, the average size of an apartment women prefer ranges from 500 to 800 sq.ft. (in metros) as they often attach greater importance to security rather than the size of the home. Other factors that influence their purchase decision are apartments with multi-purpose spaces, entertainment and fitness facilities in the vicinity, proximity to railway stations, airport, and taxi stands.

The cons of being a women home buyer is the gender discrimination one has to face. It is assumed that women can’t grasp the technical and financial aspects of real estate deals which couldn’t be further from the truth. Real estate is predominantly a male zone and they can get patronizing at times. Single women also have to face harsh judgements from society in general who refuse to allot property to them. In case of a home loan, the probability of a bank insisting on a single woman being asked to bring in a co-applicant is a lot higher than a married one. Many banks and housing finance companies sell home loan and other financial products to women by offering special rates and concessions. But sometimes the staff isn’t equipped and trained to handle the unique queries of single women. Buying a house is a financially heavy and risky investment and handling it alone can be quite a daunting and stressful task.

What are the future opportunities for development in Jaipur

5 reasons why invest in property on Jaipur Ajmer highway