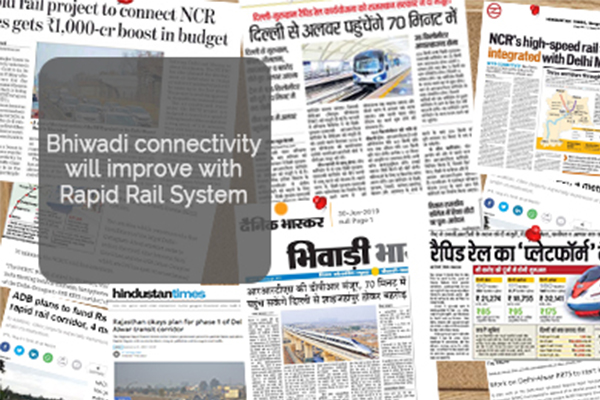 The NCR market is expanding. But what about public transportation connecting different upcoming NCR locations?

The upcoming RRTS (Regional Rapid Transport System) is touted to bring the NCR closer than ever before. This development has made certain upcoming NCR locations like Bhiwadi more attractive as investment destinations.

The Pressing Need for RRTS

Worsening air pollution, chaotic streets, congestion on the streets, increasing costs of living, long commuting time – are some of the reasons why Delhites are looking to move beyond the capital city. Several MNCs, industries and other employers too have moved their locations to other less congested regions of the NCR.

The development of the innovative and highly advantageous – RRTS (Regional Rapid Transport System) as part of the Integrated Transport Plan for the NCR 2032, brings in much-needed respite to the NCR residents.

The RRTS, when completed, will connect the major regional centres of the NCR with the capital city and the rest of the region, including the upcoming town of Bhiwadi. This forthcoming development is bound to lead to a further rise in interest in Bhiwadi as a sound investment destination.

Salient Features of the RRTS

The RRTS is a high-speed, high-capacity, and dedicated commuter train service that will connect the major centres of the NCR. Unlike conventional passenger commuter trains, the RRTS will provide on-time, high-frequency, super-fast travel along dedicated lines.

According to NCRTC, the RRTS network would offer world-class commuter services with trains running at high speeds up to 180kms and with frequencies of just 5 to 10 minutes. The RRTS would cross journeys of 100 km within 45 minutes to 1 hour, thereby providing a great choice for travellers commuting long distances along the NCR.

Cheerful News for Commuters along the Delhi – Alwar Route

In a boost to the Delhi – Gurgugram – Alwar route of the RRTS, the Rajasthan Government has approved the DPR for the first phase of the RRTS network. When completed, the Delhi – Gurugram – SNB (Shahjahanpur – Neemrana – Behror Urban Complex) rail corridor will reduce travel time from Delhi to Gurugram to just 70 minutes.

Once the entire line is completed, commuters can travel from Delhi to Alwar in just under two hours. The Haryana government has already given its approval for this phase of the RRTS and the NCRTC (National Capital Region Transport Corporation) will be the agency that implements the prestigious RRTS project.

When will the RRTS be launched?

According to an article published in the LiveMint, the first section of the RRTS will be launched by early 2023 and the entire Delhi – Meerut route will be ready by 2025.

The central government has emphasized time and again that Gurgaon and the rest of the NCR are where the major industrial and infrastructural developments will happen in the next few years. As part of the numerous progressive initiatives by the government like – Make in India, Digital India, Skill India, Smart Cities, and Swachh Bharat – the government promotes Gurgaon, other parts of NCR and the Delhi-Mumbai Industrial Corridor (DMIC) as the hubs of investment and industrial growth.

So, it’s essential that the region has a robust public transportation system, like the RRTS and hence work is in full swing.

Proposed Timeline of the RRTS Project

Very often, whenever the government announces an infrastructural growth project, citizens are skeptical as they believe that the project has to go through several levels of bureaucracy before it can ever see the light of the day.

How will the RRTS impact the Living of People in and around the NCR?

Once completed, the RRTS will have a major impact on the way people travel in and around the NCR. According to a cost benefit analysis done by the Niti Aayog, Here are some of the salient highlights of the RRTS:

Increased economic activity in the NCR as companies and industries would be able to attract the best of the talent in the region, thanks to super-fast connectivity and commutes.

The next generational mass transport system, the RRTS will not only cut down travel times in the NCR, but will also help to reduce air pollution and traffic jams significantly.

Delhi real estate market is no longer a top choice for investors due to its limited supply, burgeoning population, high prices and overloaded infrastructure. The demand for emerging regions of the NCR like Bhiwadi is on the rise due to better lifestyle, lower cost of living, freedom, and security offered. This small Rajasthani town is just 40kms away from Gurgaon and is one of the key regions identified for the initial construction of the RRTS.If you are interested in purchasing a home in the NCR or looking for investing in a property in the region, then Bhiwadi is a great choice, with high potential for returns on your investment.

With the RRTS project underway, property prices are likely to shoot up significantly once the RRTS is completed. Act now, pick up your preferred property in Bhiwadi and make a smart investment without overshooting your budget.