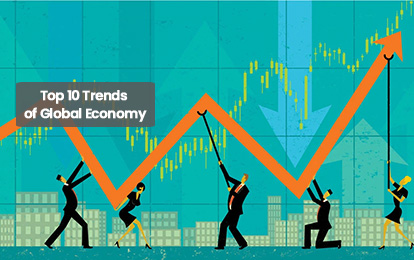 The world might have witnessed a never-seen-before situation in the year 2020 and the global economic flows might have been disrupted to a huge scale. But what is important today is the time ahead of us – the year 2021 and beyond.

Understanding the current economic situation is very important to adapt & grab the best out of the global market trends. Explaining with deeper insights, we have broken down the analysis by Mr. Ruchir Sharma into a much simpler tone for our readers. Mr. Ruchir Sharma is the head of Emerging Markets Investment and Chief Global Strategist at Morgan Stanley Investment Management and has also authored many books that have topped the chart as New York Times-Best Seller.

The forecast of Top 10 Trends of the Global Economy 2021 by the reputed mind of the Wallstreet can be notably taken as below:

The trend for 2021 is expected to be the mirror reflection where the national & world GDP is forecasted to rise higher on the positive side while there would be a downfall in the stock market. This disruption is attributed to the massive amount of stimulus pushed into the economies by the Governments. The overall stimulus plunged into global economies in the 2020 crisis is approximately 5xTimes the stimulus that was pushed during the 2008-09 Global Financial Crisis.

The inflation after 20 years of low & stable pace is long-due in play and the economic contraction of 2020 has simply made the situation more vulnerable.

As per the market situation, the triggering of inflation to rise can be associated to the following 4-D’s:

Although inflation is gradually a slow process that takes years to peak but it wouldn’t be wrong to say that the seeds have been sown!

Rise in inflation directly result in the rise of interest rates. There was a decline in interest rates in India since 2018 but they were still higher than the global levels. One more trend that would be accompanied is with the higher interest rates, share prices would no longer boom.

Honestly, homes are most affordable in India than ever. This decline in property prices in india is in contrary to a hike in the global market. The reason behind this could be the real estate boom in late 2000’s when there was an oversupply of real estate assets. This has lead to a negative change in property prices if not stagnant while the people’s income has increased over the years. Ultimately favoring the affordability factor of buying a property.

This happens to be a great time to buy real estate property at a fixed rate mortgage for the current years before the interest rates tend to go higher. The property plays as a hedge against inflation, that means with increase in inflation the property prices are supposed to do well and rise higher! With higher affordability ratio, better interest rates and lower cost, this is sureshot the best time to buy property.

Trend#5: Decline of US dollar

USA has been dominating the world in terms of global reserve currency from 1920 till date. To look at historic trend, an average period of this dominance has been of 94 years as below:

20% of all the USD circulated globally was printed in 2020 alone!

As an alternative, bitcoin is booming with a market cap that equals to $700 billion approx. with a rise in value up 300% in past 12 month and decreasing volatility has made bitcoin subsequently more stable.

The commodities like oil, steel & minerals have seen the “rise & fall” in a such a repeatitive manner that it can be termed as a Pattern! The pattern has been consistent over the last centuary and is forecatsed to continue.

Seeing the trend of fall in commodity prices since 2010, there is a huge chance of it seeing a surge given the pattern of history. Also to support the fact, it should be duly considered that there has been commodity price rise when the U.S. Dollar has weakened in the past.

Trend#7: The comeback of developing countries

A good news for India, there are strong signs of comeback for the developing countries in the coming years. With the pandemic-inspired digitization (and pre-pandemic momentum towards digitization in India), the expected annual growth of digital revenue 2020-2024 is set to reach around 13% in developing countries as compared to 11% in emerging markets & 6% in developed markets.

With a much greater need than ever, economic reforms in developing countries like India would drive productivity higher and therefore, could lead to better economic growth. Also, with higher attention given to attract foreign interest & foreign capital with industry setups, India is on path to make a noticeable comeback. Last year, India attracted 23 billion USD of foreing investor flow ranking only second to China.

Trend#8: Spread of the digital revolution

With growth in digitization, there will be a surge in economy especially due to ease in the financial banking sector as well as opening stock market to more players!

As per stock market trends, the top 10 stock of any decade would see an average growth rate of 2073% and it would fall to mere an average growth of 63% in the subsequent decade. Just like Amazon, Facebook, Google and many of the current global top 10 of the decade weren’t actually in the list in the previous period, something similar is assumed in the current cycle too!

The disappearance of current giants is set in play due to their large sizes & slower growth. Also, the consumer taste change with change in consumer behavior & surroundings! From an individual investment point of view, it is highly suggested to not make a substantial investment in the top companies as their growth rate would tend to drop. Instead, a preferable choice would be new upcoming challengers who are more local and cater to the user needs in a more attractive way.

Trend#10: The end of TV…except India

With a decline in TV viewership in USA, India is comparatively a more stable market that saw a growth of 7% in TV viewing. Although India also witnessed 136% increase in paid video streaming like netflix, hotstar & prime videos.

The pandemic has accelerated many trend that were already in play and with change in the user lifestyle and availability of “On-Demand” content, watching television in a linear way is largely on decline. Although many such trends will see a downside when people get back to somewhat older lifestyle but this hype of OTT is forecasted to outlast the pandemic era.

With life returning to pre-COVID normal in many countries where people are going out, dining, traveling, spending & exploring at almost same pace as before, the world can be said emerging out from one of the worst crisis in terms of economic contraction in the last 75 years. Let’s grab this lemon-19 situation and make the best lemonade out it with these structured & well-forecasted trends while we still have time to act on them.

What does Vastu say about the home?