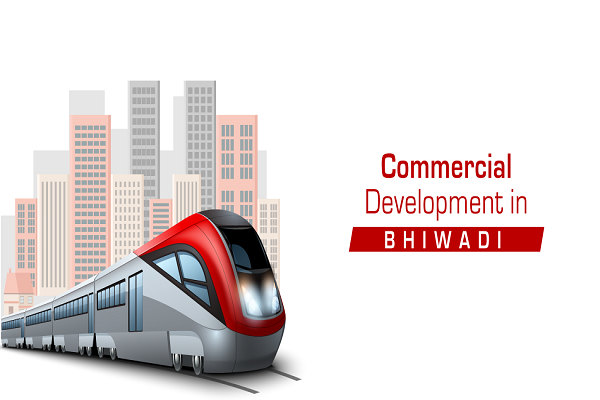 A bustling industrial town and termed as the gateway to the royal state of Rajasthan, Bhiwadi in Alwar district is spread over nearly 5300 acres with over 2500 operational MNC and domestic industries. It was a tier II city but now Bhiwadi has emerged as a credible alternative to Gurgaon as it’s social and physical infrastructure and civil amenities are equal to the ones available in any metropolitan city. According to the Economic Times, Bhiwadi is the new suburb of Delhi, as the town is at a convenient distance from the Sohna-Gurgaon cluster.


The landscape of Bhiwadi undergoing commercial and social development at a rapid pace because of various reasons which have been discussed below:

1. The Khushkhera-Bhiwadi-Neemrana Investment Region is being developed in an identified area of around 165.6 sq km. The objective is to create a world-class city in this area, with industry as the main driver of economic development and employment with non-industrial and non-processing uses. Residential, commercial, and institutional land area has been earmarked based on industry-driven demand and included in the elaborate master plan that includes a strategy, framework and concept plan. The broad vision for the investment region is to be a leading place for Rajasthan‘s manufacturing industries. The planned development and unique amalgamation of the ethnic and modern-day city life will benefit the developers and buyers alike in the adjoining areas.

2.   Bhiwadi is leveraging on its locational advantage. Industrialists from Delhi, Punjab and other parts of India have set up base here because of its easy accessibility to various big cities like Delhi (65km), Gurgaon (22km), Faridabad (60km) and Jaipur (200km) and it is only 55 min from Indira Gandhi International Airport and the nearest railway station is Rewari Junction (26km). Bhiwadi is nearby Manesar which is also an emerging industrial and real estate hub which has brought the attention of investors and buyers on Bhiwadi as well.

3.   Delhi to Alwar approved metro route and RRTS which will connect Bhiwadi to Gurgaon and Delhi will give great connectivity and convenience to commuters living in Delhi/NCR and working in Bhiwadi. The completion of the northern, southern and connecting peripheral road will provide smoother and easier connectivity to Bhiwadi. The shifting of Kherki Daula toll plaza will also be a plus point.

4.  Bhiwadi has become the third largest industrial hub of India with a clever participation of more than 2500 MNC as well as domestic industries like Mahindra, Pepsi, Bausch & Lomb, Gillette, Honda, Ashok Leyland, Eicher, Saint-Gobain, United Breweries, Micromax etc. which has given employment to hordes of skilled workers of all grades. Bhiwadi is now playing an important role in contributing to the economic development of Rajasthan.

5.   The rapid industrial growth coupled with good connectivity has made Bhiwadi very attractive to people interested in real estate. With affordable prices which are within the reach of the middle class, Bhiwadi is expected to give good returns in the long term. The expected movement of various companies too will boost the real estate market in Bhiwadi and thus provide good land appreciation. As people start moving into these companies, the need to have a house near their place of work will become imperative, which will also help in boosting the rental values. Bhiwadi is already acquiring a name for itself as a real estate destination and competing on an equal footing with Gurgaon in this respect. Real estate developers who have a presence here include Parsvnath, MVL (real estate division), Ashiana, Jagriti Infrastructure, Kajaria, M Tech, etc.

6.   The Electronic Industries Association of India has initiated to set up the ELCINA Electronics Manufacturing Cluster (EMC) in Bhiwadi, Rajasthan. With an investment of Rs. 600 crores, there are about 19 facilities to be set up in the cluster. The government’s agenda behind this cluster will be to promote the domestic electronics industry and also have less dependence on imported electronic goods.

7.   The Rajasthan Housing Board is very active in the industrial town of Bhiwadi. They have made sure that the city is equipped with necessary basic amenities like water, power, reputed schools & colleges, transportation, hospitals, telecom networks, banks etc. Another plus point of the city is its flawless water supply system.

8.   Bhiwadi-Alwar road has the status of a national highway, called NH-71 B. Developers like Avalon, Nemai, Terra City, M2K, Cosmos, Essentia, Omaxe, Kajaria, and Krish have projects on the Bhiwadi-Alwar Road, on both sides of the Tapukara Industrial Area. The Honda manufacturing unit employed 6k more employees which prompted developers to create more residential units in the area. Encouraged by this development, Toyota is also planning to set up a manufacturing plant in the same location.

9.   Omaxe Ltd. plans to set up an Export Processing Zone (EPZ) and a multi-products SEZ project near Bhiwadi. Yet another SEZ of about 1,125 acres is being developed by RIICO at Khushkhera, 12km from Bhiwadi on Alwar bypass road.

10.   The Aviation Ministry has approved a Green Field Cargo Airport in Alwar to facilitate business on Delhi-Mumbai Industrial Corridor (DMIC). Authorities have allotted an area of 636 hector for the first phase of development of Kotkasim aerocity into one of the biggest cargo and logistics hub in North India. Bhiwadi will benefit immensely from this initiative.


Once a sleeper city, Bhiwadi has become a sleeper hit as an industrial and real estate hub for both investors and citizens. The city’s future looks pretty bright with the hordes of initiatives by the Govt. and investment by domestic and international companies. This would lead to the social and economic development of Bhiwadi as a city. Residents will benefit a great deal as the investment will lead to an upgraded lifestyle at par with its neighbours like Delhi and Gurgaon.

Which city you should reside in? Jamshedpur or Bokaro?