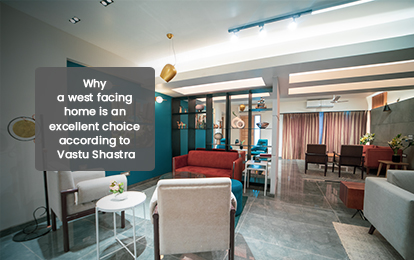 However, according to Vastu Shastra, all homes are considered equally auspicious, and there is no such thing that west-facing homes are not as good as north or east-facing homes.

A west-facing home can be as equally prosperous as other homes, provided you follow certain Vastu Shastra principles. Here, in this post, we take a look at the advantages of choosing a west-facing unit and the Vastu guidelines to follow for west-facing homes.

What is a West-Facing home?

What does Vastu Shastra say about West-Facing Homes?

According to the actual principles of the ancient science of Vastu Shastra – all homes be it north, east, west or south-facing are all considered equally auspicious, provided you follow the right design principles based on Vastu Shastra.

What is the west-direction suitable for?

West facing house depends on the orientation of the rooms that one should be aware of before moving in. Some suitable orientations for you are as below that west-direction is suitable for:

The Benefits of Living in West-Facing Homes

According to Japanese home design philosophies, homes that have west-facing doors have a sense of youth and exuberance. It is believed that west-facing doors let in energy into the home. This is why in Japan – all traditional Geisha homes have the main doors facing the west.

It is believed that people who live in west-facing homes are likely to be prosperous and have plenty of friends. They won’t have any enemies and will be loved by all at their workplace, in personal relationships, and social situations.

West-facing homes are ideal for people who are in the following professions – politicians, teachers, religious leaders, and business people.

Here’s a simple explanation of what are padas. Imagine the west side of your home as a straight line running from North West to South West. Divide it into nine equal parts. The first segment in the north-west is the 1st pada, and the last segment in the South West is the 9th pada.

The main door or entrance of the house should be positioned in any one of the following padas (or segments) to reap the benefits of Vastu Shastra – 3, 4, 5 or 6.

These are the Vastu rules for the main door of West-facing homes. Apart from these, other Vastu design principles help you get the best positive vibes from a west-facing home.

According to Vastu Shastra, there are different design principles for different homes based on their orientation. Let’s take a look at some of the do’s and don’ts of Vastu for West-facing homes.

Avoid these Designs for West-Facing Homes according to Vastu Shastra

Choosing the house as per Vastu Shastra not only depends on the direction or facing of the house. It is equally important to know that a house may suit you or not depending upon the purpose of buying the property and business or profession of the buyer.

It’s time to put that myth to rest of considering the fact that west-facing homes are inauspicious. Such houses are best for the peopole who are involved in the trading businesses.

So, make use of the above guidelines to pick the best west-facing homes from homes that aren’t designed according to Vastu Shastra.

Finally, even if you don’t believe in the principles of Vastu Shastra, west-facing homes are an excellent choice as you can enjoy the warm rays of the setting sun.

Why greenery is an important factor to consider while buying your next home?

Is it the right time to buy property in Jaipur